Maybe Michael Bloomberg isn’t such a great businessman after all. At least not when it comes to returns on investment regarding his presidential campaign.

According to the Real Clear Politics polling averages, Bloomberg entered the crowded 2020 field polling at around 2.4%. After a massive and unprecedented ad spend which I wrote about here, he has spent $125 million in televisions and social media ads. This translates to $52 million dollars per percentage point increase in his average poll numbers. 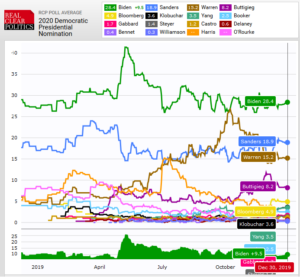 You don’t need an Ivy League business degree to see that’s a terrible return on investment. At this rate it will cost the Bloomberg campaign another $260 million just to break double digits, which would still leave him behind Biden, Warren, and Sanders.

Note: If you enjoyed this article, please make sure to share it! If you would like to support our site in other ways, please visit this page.