The guy who runs more companies than any other CEO, yet if you follow him on social media, all he does is travel the world giving speeches, going to clubs, impregnating various women, and posting memes.

People are starting to wonder if he actually runs any of these companies at all.

But one thing we know he does is change his mind, and usually with disastrous results for whoever happens to be part of his little game.

Not long ago, when the crypto market was at its peak, Elon announced Tesla would accept Bitcoin payments for Tesla cars.

Just a few weeks later, Elon started a crash that would erase half of the crypto market by stating he believed Bitcoin was too harmful for the environment, and he has reversed his decision to accept Bitcoin.

Suddenly the talk around cryptocurrency was how bad it was for the environment.

Of course, this coincided with China’s ban on Bitcoin mining.

Was it all coordinated to crash the crypto market?

Many believed it was, as Elon and Tesla suddenly enjoyed positive news coverage by the state-run media in China after months of bad press and even protests.

Elon garnered praise from moderates and conservatives alike when he said he was going to buy Twitter and “unlock” its great potential.

He even Tweeted that the “woke mind-virus” pushed by Twitter was the biggest threat to humanity, and one he needed to conquer, even before continuing his work on a rocketship to Mars.

But I guess he changed his mind on that as well. Now he says he has no interest in buying Twitter. Too many bots, he says.

But what about that woke mind-virus? I guess Elon moved on and no longer feels it’s a threat.

Then of course we have his courting of the MAGA crowd.

Besides his Tweets about the woke mind-virus, he also posted Tweets asking about media cover-ups of wrongdoing by Hillary Clinton, Joe Biden, and other enemies of Trump and his MAGA supporters.

Elon even said he had started voting Republican for the very first time.

But I bet you can guess what’s coming next.

Elon now says Trump needs to hang up his hat and go away.

So without much help, you can probably see a pretty obvious pattern here. Elon likes to change his mind, oftentimes destroying or severely harming whatever it was he was flirting with.

Is it all just trolling? Or maybe Elon serves a different master?

Trump himself has recently replied to Elon, calling him a “bullshit artist” in one statement.

Then today, he put out a statement saying  that when he was president, Elon would have happily got down on his knees and done anything for more government subsidies. 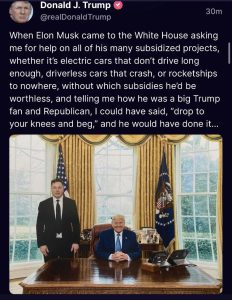 Was Trump trying to tell us Elon is a sell-out and that he’ll sell out to anybody that keeps his house of cards standing?

If so, who is Elon’s master that he’s sold out to this time?

If you want to learn more about our site and what we do, click here.

Finally, if you enjoy this article please make sure to share it. It really helps.