I’m sure all of you are well aware of the constant false attacks on Trump, his business partners, and even his family. These false attacks have come non-stop from the media, deep state intelligence officials, and out-of-control FBI agents. And while Trump has stood tall and has not backed down, we must think about the future and what this all means for when Trump is no longer President.

The elite ruling class of this country have sent a very powerful message with their attacks on Trump and those around him. That message is that any outsider will not be tolerated and every resource available to the ruling elite will be used to destroy them.

The ruling class of the two parties have always attacked outsiders. One only needs to look at what happened to third party candidates who gained traction such as Ross Perot. Ross Perot was gaining steam in 1992 as a Trump-like figure, a businessman with a no-nonsense approach to running America like a business and getting back to common sense America first governance. But he was attacked behind the scenes.

Ross Perot was a highly successful businessman with no history of odd behavior. Perot claimed that he was approached with information that political operatives were going to release fake comprising photos of his daughter if he did not leave the race. Ross Perot, at the height of his campaign, dropped out.

In this case we can see that the elite ruling class was not going to allow an outsider to go any further than they already had. But today they have Trump, a man they never thought would win, and they have gone into overdrive to make an example of him.

And that’s the lasting danger of this wild smear campaign against Trump. It has scared pretty much every outsider with the talent to be President into never wanting to run for President. Why would any  man risk their reputation and possibly their life, the well being of their business partners, and even the well being of their family..even their children are at risk as we have seen with the media’s attacks on 13 year old Barron Trump.

What person would want to step into that firestorm? Not many, and that’s one of the reasons Trump is such a rare figure. I doubt any other person could have withstood these fake attacks and still be holding strong.

Other politicians have been brought down by a single headline or story, but not Trump. So one must ask, how many other Trump-like figures are out there, and sadly the answer is probably none.

So that is why it so important that this smear campaign be exposed and those involved brought to justice. All the collusion between the FBI, intelligence officials, Obama’s DOJ, and the media must all be brought to light and those who violated the law brought to justice. For if it is not and those involved are not punished, no outsider will ever run for President again, and the elite ruling class will have succeeded even if they couldn’t topple Trump himself.

Note: If you enjoyed this article, please make sure to share it. Also, visit our store where we feature different political and meme style T-shirt designs every week and it helps support the site and keep it free from obnoxious pop-ups and video ads.. Click here to visit our store. 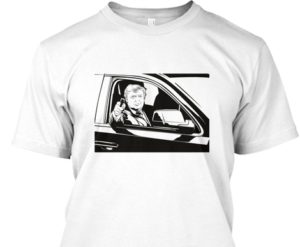