If you closely follow the plans of the elites, you quickly realize they don’t really operate in secret. In fact, they operate right in the open.

Those who govern our world either through positions of power or think tanks like the World Economic Forum often tell us exactly what they have planned. They just do it in a very subtle way so that when it finally does happen, people aren’t as shocked by it.

A perfect example of this happened over the past week when on two separate occasions the elites “leaked” their plans to use lockdowns to improve cities and fight climate change.

The first incident was from The World Economic Forum which sent out a Tweet stating that lockdowns are quietly improving cities around the world. 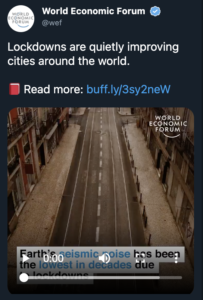 Of course, this is complete nonsense. The lockdowns have devastated cities. Murders and car-jackings are skyrocketing, along with suicides and homelessness. But according to the World Economic Forum, things couldn’t be better.

After a quick backlash, The World Economic Forum took down the Tweet and specially prepared video. But they didn’t back down from the original Tweet’s message and instead only stated that only the wording was wrong.

Next was from the Guardian, which posted an article headline that stated the only way to meet the goals of the Paris Climate Accord is to have regular covid-style lockdowns.

Once again, this was quickly met with a backlash, causing The Guardian to change the wording of the title, but not the original intent of the article.

As you can clearly see, these posting were not “mistakes” at all, and were instead meant to get the public comfortable with the idea of never-ending lockdowns to fight whatever imaginary enemies the elites decide to conjure up in the coming months and years.

First it will be climate change. New lockdowns and restrictions will be proposed to fight what many progressives have already labeled as the greatest threat to mankind. Many have even pushed the preposterous notion that the world will simply end in 10 years or less if we do nothing on climate change.

So clearly if something can destroy the entire planet in less than a decade, a few lockdown restrictions are a small price to pay to stop it, right? Or at least that will be the argument they use to sell it to the public.

I wrote about this exact same thing nearly a year ago and at the very beginning of the lockdowns. The lockdowns have now become a permanent tool in the toolbox of those who rule over us. Governments never add new powers to their arsenal only to let those powers go away a year later. Just like new laws, they only go in one direction, and that’s more restrictive. They almost never go back and ease restrictions once put in place.

So just like so many things over the past year that started out as “conspiracy theories” only to be proven true. The never-ending lockdowns are well on their way to becoming a permanent aspect of modern life if the people of this world don’t start to push back.