When the economy is talked about in the mainstream media, you almost never hear about a very important indicator and one that really describes how the average person is doing in the current economic climate. That indicator is called the labor share, or the percentage of economic earning that is paid as wages. So basically, how much of GDP is going back to the workers as wages.

This can be shown as a graph which depicts wages as a percentage of GDP over the years. And one look at the graph should give people a good idea as to why most people do not really feel the economic recovery of the last decade as much as they should. While the overall economy is doing well, the amount that is paid back in wages is getting smaller. 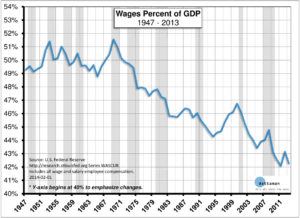 Despite record stock market gains and a GDP that recently tagged at 4.1%, most people are not seeing that money going back to them as wages. Something is keeping more and more of that money stuck at the top and as we look closer, it’s not really a political issue or one that politicians can even fix.

We also see why this is an unsustainable path for the economy to be on. The trend is very strong since the 1970’s, when wages as a percentage of GDP suddenly started turning downward after being relatively stable until then. So stable in fact, that economist John Maynard Keynes thought the relationship to be surprisingly stable and should remain constant forever. However, as we see in the 1970’s it started trending downward and continues that trend today, troubling economists as to why.

This isn’t just an American issue, most modern economies like that of the U.K. are seeing this exact same trend.

So what are the causes? Economists are debating the causes but there are few things they agree on as contributing factors.

The first being increased productivity through automation or technology. This can make business more efficient and thus increase earnings, but it doesn’t necessarily increase wages being paid out at the same time. Think about it like this, a robot can replace 5 workers in an automotive factory, and although the technician working on that robot probably has a higher salary than factory workers since he is more skilled, it doesn’t make up for the 5 workers who no longer are getting a paycheck. This is a very simplified example, but it illustrates the point. Some economists believe that the increase in salaries should make up for workers being displaced, but in real life, we don’t see this happening.

Some economists believe that this automation can be responsible for as much as half of the decline in the labor share.

Another thing that is related to automation is the way technology companies can replace existing traditional companies, but do it with fewer employees. Take the popular example of Blockbuster video and Netflix. Everyone knows the story of how Netflix put Blockbuster out of business. But what rarely gets mentioned is that at the time Netflix started to topple Blockbuster in a serious way, it had just over 2000 employees. Blockbuster at its peak had 84,300 employees worldwide. Even now, Netflix only has 5400 employees.

So with this example it is very easy to see how this type of business disruption leads to far less money generated actually going back to people as wages. Netflix absorbed all the money blockbuster was making and more, and only distributed it back in wages to 5400 people. While before that, Blockbuster was paying 84,300 people. So as you can see, this type of business greatly contributes to a falling labor share number and this is happening all around the economy as technology disrupts traditional businesses.

So while the definitive causes are not known, the results are obvious. If this trend continues it will only add to greater income inequality throughout the world. Income inequality is something we know that leads to destabilized societies, violence, and other things that threaten a civilized world.

But what can be done? At this point, not many options have been put forth. This effect seems to be so cooked into modern economies, combined with exponential technological advancement, that their may be no way to stop it.