The gun debate has cooled off in recent weeks after it was pretty much the talk of the news cycle following the Parkland school shooting. Protests followed and the media couldn’t get enough of the teenage activists who became of the face of the new anti-gun movement.

But here we are, a month or so removed from that frenzy and those anti-gun superstars seemed to have lost there shine. In an ironic and sickening twist, the anti-gun movement needs mass shootings otherwise they seem to lose their focus and go back to just fighting other issues.

And it is this very reason that the progressive anti-gun movement has such a hard time gaining any traction. They simply don’t believe in what they are saying. They love to pretend that they care so much but in reality they don’t. Stars like Jimmy Kimmel show up on TV and fight to hold back tears after news of a mass shooting happens. But once the spotlight moves elsewhere, Jimmy is happy to get back to making jokes and millions of dollars laughing it up with superstars. His tears have all dried up and apparently so has his empathy.

Now if you contrast this with the pro-gun movement, there is an obvious and stark contrast.

One example I like to use is the famous speech at the NRA given by Charlton Heston. During the speech while standing at the podium, he raised a rifle and declared “…from my cold dead hands” a reference to a popular slogan regarding giving up your gun only if its taken from your cold dead hands. After he delivered the line in typical boisterous Heston style, the crowd erupted into cheers and applause. 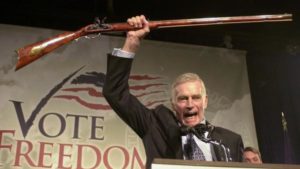 People often miss the sentiment here. Heston is declaring he will fight to death before giving up his gun. To him this is a life or death issue. And the crowd applauding and cheering are in total agreement. That’s the difference between the anti-gun crowd and the pro-gun crowd. The people who cheered on Heston when he said he would fight to the death for his gun were not faking it. They weren’t pandering like Jimmy Kimmel or others. These people in the crowd and millions around the country feel so strongly about the second amendment that they cheer at the idea of having to fight to the death for it.

You will never see that kind of zeal and energy on the left. The left would never actually sacrifice anything to change gun laws. They claim to cry over victims, but they won’t sacrifice anything to try to do anything. Once again, it’s more virtue signaling to appear empathetic, but their true inaction speaks louder than their phony public actions which always fade when the cameras are gone.

You can see this in virtually everything the left fights for. During #metoo movement, it turns out that some of the worst offenders of sexual harassment and even rape were those who claimed to be liberals and progressives. Perverts like Harvey Weinstein attended pro-women marches and played the part to perfection as the modern male feminist, even bashing Donald Trump as a “misogynist”. But in reality, he was a monster. And worse than that, everybody knew it. Even progressive women knew it and did nothing. It was all just another example that liberals don’t actually believe in anything they fight for. And the proof is in how quickly they give up or even sell out when personal gain is on the line. Modern male feminists claim to be progressive and pro-woman, but if a situation presents itself where they can use their power to force a woman back to their hotel room for quick personal gratification, they will suddenly ignore their supposed ideals and do whatever suits them in the moment only to go on the next day and claim how virtuous they are.

As is quite obvious by now since this has been repeating over and over again, with issue after issue. The progressive left doesn’t really believe in anything they claim to, and that is ultimately why they will fail. A mobilized group who truly believe in what they are fighting for will always defeat an opposing group who only really cares when the cameras and the spotlight is on them.