History may show that the election of 2020 itself wasn’t really the standoff everyone thought it would be. Instead, it’s the fight afterwards that may set the tone for this country in the decades to come.

By any objective measure, Democrats are clearly trying to steal the election. The outright fraud is so brazen, it would be comical if it wasn’t so sad.

I’m sure you’ve heard all the details, so I won’t bore you with repeating them here. From the magical 138K ballots that appeared in Wisconsin over a 30 minute period, to the fact that Biden votes came into some states at a rate of 100K to zero against Trump. It’s all obvious fraud and the states, the media, and the giant tech companies are all complicit.

But this fight is for more than just this election. If such a brazen fraud goes unexposed and unpunished, the Democrats will be even more emboldened than they are now. Just look at the impunity with which the media and tech companies operate now. Twitter has no problem censoring the President of the United States. The mainstream media has no issue stoking violent riots across the country and publishing knowingly false information.

If Democrats and their allies operate with this level of impunity now, imagine how they will act after they successfully steal an election.

I can guarantee you they will become even more brazen. Democrats will begin ruling by decree, just as they have already started to do during the unconstitutional shutdown orders in many states. Tech companies and the media companies will give them cover, blocking anyone from voicing opposition to their mandates and unlawful proclamations.

Then they will set their sights on the most troublesome roadblock to their total tyranny, the Second Amendment. Riding high on their recent stealing of the election, states across the country will declare gun violence a “statewide emergency”. They will begin issuing executive orders and mandates, exactly as they have with the pandemic. The Biden administration will follow suit. Gun control will slowly turn into gun buybacks, and finally gun confiscations. And it will all be done through unlawful mandates, executive orders, and decrees.

We’ve already seen it happen. Businesses were shut down, families were forced to cancel weddings and even funerals for loved ones, all by unlawful mandates across America. If you think for a second those are going to go away, I’m afraid you are sadly mistaken. Those mandates are now a permanent tool in the toolbox of the progressive elite.

So this election fight isn’t just for the White House, it’s for much more than that. This is truly a fight to defend the very foundation of liberty and freedom in America. Democrats and their allies in the media have shown how they plan on governing in the near future. They will bully, censor, deplatform, and shame anyone who dares speak out against them. They will break the law, and use the media and tech companies to cover for their wrongdoing.

If Democrats are allowed to steal this election, I can promise you the guns will be next on their list. For they know once the guns are gone, their last roadblock to total control will finally be removed. 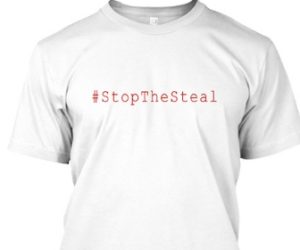