Well, it looks like Joe Biden’s 2020 campaign bid is crashing and burning before it even starts.

News broke a few days ago that a woman has come forward and alleged that Joe Biden inappropriately touched her during a political event in Nevada. Strangely but not surprising, another photo from the same event seems to show Biden smelling the hair of actress Eva Longoria. 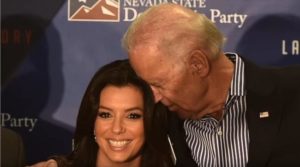 What makes this so interesting and not at all surprise is that countless photos and videos have been circulating for years of “creepy” Joe Biden acting totally inappropriately but with mostly young girls.

From pulling their heads close to his face for a kiss and what even appears to be groping that causes the children to swat his hand away, Biden has a long history of being way too “touchy feely” with women and even young girls. 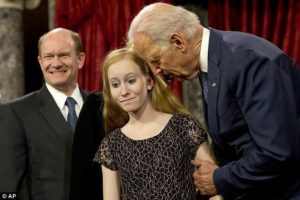 But based on this news story coming out last week and the fact that the mainstream media decided to cover it tells us that Biden’s chances in 2020 are basically zero.

Almost a month ago I predicted that the modern far-left controlled Democratic party would not accept an “old white guy” like Biden to be their nominee simply based on their current SJW intersectional beliefs. It’s just not what the party is looking for right now and Biden has no chance in the modern political climate of the Democratic party.

However, he could probably still attract some decent high-dollar fundraisers and the DNC doesn’t like the sound of Biden siphoning off money that could go to the candidate they decide to anoint. So I wouldn’t be surprised if this story made it to the public and media’s attention on behalf of the DNC pushing it out there as oppo-research on Biden.

They knew once this story broke, people would start seeing the other photos of Joe Biden as those photos and videos will pop up whenever someone does a search for Biden.

This one story is likely going to torpedo Biden’s chances over the long run. I don’t see a way out for him with all the other video and photographic evidence floating around that supports the image of “creepy” uncle Joe. He’s not going to be able to shake that image and it will just get worse once the other candidates start attacking him. It’s too juicy of an area for his rivals not to attack.

So I’m going to go out on out on a limb here and predict exactly how the 2020 Democratic nomination process plays out based on what we have already seen. Basically, it’s going to come down to Bernie Sanders and Kamala Harris. The DNC and the establishment media are going to shaft Sanders yet again just like they did in 2016, leaving Harris as the nominee.

Of course, any unforeseen scandal can change all that. But that’s the most likely scenario. None of the other Democratic candidates are ready for prime time and the DNC doesn’t want any of them either. Sanders already has a good sized base of support and he is raking in money like crazy. Harris on the other hand seems to be who the Democratic establishment want, including the Obamas and most of the media.

So Biden is out before he even started, and if you want to spare yourself the nomination process, you can make a pretty good bet 2020 will see Trump vs. Harris.