As I’m sure you are aware by now, there is yet another large caravan of “migrants” who are determined to cross Mexico and arrive at the U.S. border. The caravan is said to be about 5,000 strong, but some estimates say it is growing and could be as large as 10,000 soon.

But one thing that is becoming clearer every day is that this caravan is not the spontaneous, organic group of migrants that many in the media claim. Clearly there is a mix of money and political operations behind the caravan. Various groups are helping to maintain and shepherd this caravan of migrants toward America.

There are plenty of photos of the caravan that simply don’t pass the smell test. Many of these so-called economic refugees who are supposedly so impoverished they have no choice but to walk across Mexico seem to be freshly showered and clean shaven. Not something you would expect from weary, impoverished travelers on foot. Not only that, many photos show caravan members with like-new brand name apparel. Things like expensive backpacks, iPhones, and even pricey baby strollers. 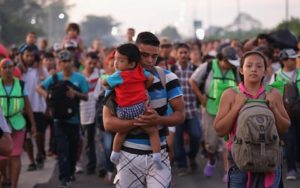 We have areas in America where people look worse off than some of these economic refugees.

So the bottom line is that this caravan is being orchestrated by outside political forces. Of course, there are some truly poor people within the caravan, but many others in the group are being used, paid, or tricked into taking part in the caravan and the march. A fact that brings me to the point of this article and that is to compare this “crisis” to the recent orchestrated Kavanaugh smear campaign.

As we saw with the Kavanaugh smear campaign, a group of connected donors, lawyers, Democratic officials, and liberal elites conspired to spread false accusations against Justice Kavanaugh. You are all well aware of the story, as well as how it backfired. Polling showed centrists and independents didn’t like what they saw, and the Democratic plan backfired and ended up helping Republicans.

Will this caravan have the same effect? It’s very possible since it follows the previous failed Democratic technique of doubling down on fake outrage only to have it backfire.

With the Kavanaugh smear, the Democrats started off with a somewhat believable story to accuse Kavanaugh with, but then they doubled down and quickly overplayed their hand with wild and baseless accusations, which quickly derailed their efforts and ultimately backfired. Many of the Kavanaugh protesters were paid and their efforts orchestrated to create “viral” moments such as the now famous clip of a Soros backed protestor yelling at Senator Flake in an elevator.

Now, with this caravan, we have a similar road map. Earlier in the year, the press followed another group of migrants to the border, a much smaller group. Then Democrats seized on the fact that some children were separated from their families, and used that to attack Trump’s policies. They scored a few political points, but now whoever is behind this migrant caravan is doubling down. Sending 5,000 or more migrants to the border is not going to go over well with independents, the same way the Kavanaugh circus didn’t go over well with them.

So it’s very likely if this caravan isn’t stopped in Mexico, the whole plan could backfire. Thousands of unruly immigrants at the border is not going to sit well with independent voters heading into the midterm.