Is there anything that former special forces and Ivy League graduate Dan Crenshaw can’t do?

Well, he can now add the title as one of the most successful financial traders to his list of accolades.

While it has become public knowledge that Nancy Pelosi is one of the most prolific and successful traders of all time, beating hedge funds and full-time traders by double-digits year after year when it comes to returns on investment. All while she only does this part time, mind you.

But Dan Crenshaw appears to have joined whatever little-old-lady investment club that Nancy belongs to and is now matching her when it comes to portfolio performance.

According to the site Unusual Whales, which tracks the investments of politicians, Crenshaw matched Pelosi’s returns with nearly 40% gains on his call options over the year. Only four members out of the entire House and Senate were able to best him. 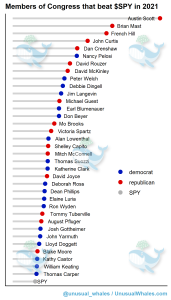 Matching Pelosi is no easy task and Crenshaw may put that feat as being harder than anything he had to do in special forces training.

For example, Pelosi somehow managed to exercise 150 calls just days before Microsoft announced their $22 billion military contract to support augmented reality for the army. A move that netted Pelosi gains of 166%.

So for Dan Crenshaw to match this type of trading acumen is truly astounding. Crenshaw appears to either be good at everything, or knows the right people to cozy up with.

But we’re not just picking on Crenshaw, although it’s easy due to his holier-than-thou attitude. Plenty of other Democrats and Republicans made highly unusual trades and in return, beat the market by double or even triple.

I guess George Carlin was right when he said “it’s one big club, and you ain’t in it”. Unless of course, you’re Dan Crenshaw.