I thought this was all just about fuel costs?

Well, that narrative seems to be falling apart about as fast as all the other mainstream narratives you’ve heard over the last 5 years.

Last week, unrest and riots took over the streets of Kazakhstan, with viral videos showing protesters clashing with police and the military.

The official narrative was that this was all no big deal and simply protests over fuel costs. But clearly there is more to the story and it could be the beginning of a large international event.

First, it started with the arrest of Kazakhstan’s powerful former intelligence chief, Karim Massimov, on the charge of high treason.

Massimov had ties to both Joe Biden and Hunter Biden. In fact, Hunter Biden referred to Massimov as a “close friend”, and they can be seen in a photo below that has since gone viral. 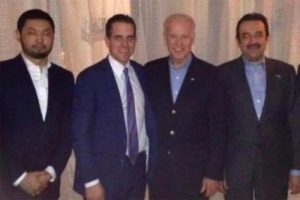 But now things get even more bizarre. Reportedly a biological research facility built in 2017, with shady funding sources tied to American, Russian, and Chinese officials, has been breached by protestors.

Although The Daily Mail is reporting that Kazakhstan officials deny the claim, Russian media sources have reported that the facility was indeed taken over by protestors.

Interestingly, the lab does research Covid and was believed to be at the center of a viral outbreak of meningitis in 2018.

As of now, the whole situation is very bizarre, with the initial claims of the unrest being about fuel prices now being proven completely wrong and sounding more like a cover-up.

There are over 160 dead already, and the military has orders to “shoot to kill”. Also, it appears as though many involved in the protests were armed and organized groups, not just random citizens angry over fuel prices.

As for now, the Kazakhstan government claims that things are settling down and under control, but we will have to wait to confirm if that is true or not.

But it sure seems like an international incident much larger than simple fuel prices is brewing on the ground in Kazakhstan. With the addition of a possible biological research lab being breached, this could blow up into an even bigger story very soon.