After last weeks completely unprecedented and almost impossible to believe surge by Joe Biden, it appears as though he is indeed the chosen candidate of the Democratic establishment and will ultimately get the nomination.

But now as the honeymoon phase is beginning to wear off, even Democratic voters are having second thoughts about Biden’s health as he continues to struggle with memory loss at virtually every public appearance.

At this point it’s no secret that Joe Biden is declining both mentally and physically. Even left-leaning outlets are having a hard time explaining Biden’s almost daily gaffes on the campaign trail. It’s brings up a serious question, and it’s a valid question to ask. Is Joe Biden  simply too old to serve as president?

So with that being said, let’s take a look at how Joe Biden has aged since 2016 compared to how President Trump has aged in that same time. It may give us some clues as to who could handle the enormous stress of being president better.

Below are two screenshots pasted side-by-side. These are 100% unedited and the original source videos are linked below as proof. Here you can see Joe Biden in 2016 and then in 2020. You can make up your own mind as to how he appears to be aging. 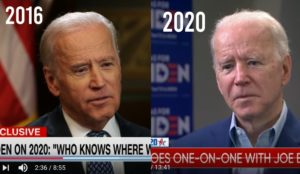 You can see for yourself via the links above that these are original screenshots and not retouched or edited in any way. Also, these were not cherry-picked in any way. If you go to YouTube and type in “2020 Joe Biden interview” this is the first result. I did the same for the 2016 interview and simply picked the first interview in the results.

But for comparison let’s look at Trump over the years. The two images below are from 2016 and then again from 2020. These two images appear to show that Trump looks virtually unchanged over the last 4 years, even with the added stress of being president.

Of course, these are not scientific comparisons and are simply based on visual observations. But I think most humans can judge how someone is aging and whether or not they could handle additional stress, specifically the stress of being president.

Given the photographic evidence above, I would say it’s well within reason to question Joe Biden’s age, as well as his ability to last another four years under the intense and unending stress that comes along with being president.