CBS News and reporter Ed O’keefe sunk to a new low in their coverage of Biden’s latest gaffe where he called a voter “fat” after being asked about his son Hunter.

During their televised segment aired on CBS News, Ed O’keefe tries to distort reality by portraying an old and confused Biden as a “prize fighter” pacing back and forth and fighting back. The reality is that the only thing about Joe Biden resembling a prize fighter is the fact that he sounds punch drunk and incoherent.

In the video below you hear Ed O’keefe bending over backwards to paint Biden as young and full of energy as the video clearly shows a slumped-over and cranky Biden looking more like he needs a nap than crawl into a boxing ring.

Then just moments later, Ed O’keefe dips into the fake news bag of tricks yet again as he labels the corruption allegations against Biden’s son to be “disproven” and only being spread by Donald Trump. How exactly can O’keefe declare the allegations as “disproven” when they haven’t even been investigated?

What you see here is the mainstream fake news on full display. Completely distorting reality on two separate topics all in under a minute in the same television report. Does Ed O’keefe really think the audience will see a barely animated Joe Biden as a prize fighter? Will the audience believe Ed O’keefe over their own eyes and ears?

Well, on the off chance Ed O’keefe wants to see a real prize fighter, I’ve kindly included a photo below he can use for future reference. 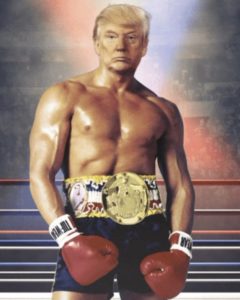 Note: If you enjoyed this article, please make sure to share it! If you would like to support our site in other ways, please visit this page.