In what seems to be a growing trend where Progressives make absurd and illogical arguments to try to defend their extreme pro-abortion stance, another example showed up on the front page of the popular social media site Reddit.

Currently, a post showing a screen shot of one of these bizarre arguments tries to compare contracting a tape worm with carrying a child. Yes, I know it makes no sense, but that’s the state of the modern Progressive movement.

Below you can see a picture of the post. 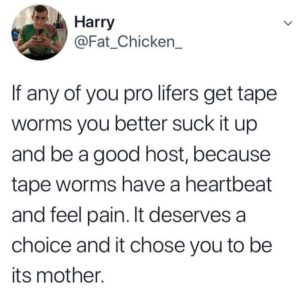 The post has nearly 20K votes on the far-left leaning sub Reddit known as r/politicalhumor. Apparently, the idiot who wrote this and the people that up-voted it don’t understand that pregnancy isn’t something you “catch”, which makes the entire statement completely illogical and pointless.

Although comments are currently locked, a common tactic on far-left sub-Reddits when one of their propaganda posts doesn’t go as planned. They lock the comments to stop opposing viewpoints from countering their attempt to sway public opinion.

Of course, all of this comes on the renewed push by Progressives to call for more extreme forms of abortion, such as in New York where abortions would even be allowed after a normal birth has occurred.

This type of thinking on abortion is indeed far-left and extreme, and virtually all polling supports the fact that this type of legislation is considered extreme.

A Gallup Poll shows that over 80% of voters oppose late term abortion. More proof that such ideas have very little public support and therefore are indeed an extreme position Progressives are trying to sell as mainstream.