It hasn’t been much more than a month since social media platforms acted in unison to start censoring what they deemed as “conspiracy” related content.

It all started with the deplatforming of Alex Jones and his Infowars podcasts late last year. But as was predicted, going after conspiracy content was just the first step towards a more complete form of information control.

Now, the target is what social media platforms are deeming as “misinformation”. 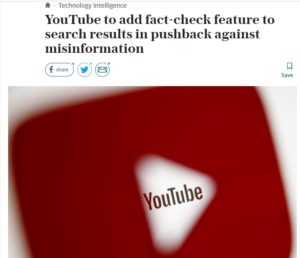 YouTube and Facebook were the first to go public with their new “war on misinformation”. Of course, they spin it in a way that makes it appear as though they are protecting their users, when the true reason is to control the narrative on sensitive political topics.

The label of “misinformation” being used by Facebook and YouTube has a much more broad and vague definition than the previous “conspiracy” content definition, the purpose being they can go after any opinion if it differs from their narrative simply by labeling it as “misinformation”. Any topic or opinion can now fall under the label of misinformation.

Before this move, social media platforms where somewhat limited in what they could censor under their previous guidelines regarding conspiracy content. They couldn’t label fact-based opinion as conspiracy theories. However, under the new “misinformation” label, they can now censor and limit the reach of opinions, even if those opinions are fact-based. All they have to do is deem the facts as misinformation and suddenly the whole opinion can be censored. Anyone promoting the opinion is now deemed a part of the misinformation campaign.

It’s a two pronged attack. First label the facts you don’t like as misinformation, then try to shame anyone considering the opinion by claiming they have been duped or are part of a misinformation campaign.

YouTube for example, is placing an additional warning on content that they deem is prone to  misinformation. In this warning, it will show a list of fact-check sites, chosen by YouTube of course, and what they have to say about the topic being searched.

This is clearly an attempt to label any dissenting opinion as misinformation. It’s far more invasive and controlling than their previous policy of going after conspiracy content. A very troubling acceleration of media manipulation in just the span of a month.

What also makes this interesting is the sheer hypocrisy on the part of YouTube. YouTube is filled with creators that push medical, diet, and exercise advice to millions of people everyday. YouTube makes no effort to vet these people to make sure they have credentials. There are terabytes of misinformation regarding these subjects on YouTube right now, but YouTube only wants to focus on a small number of “sensitive” subjects which are mostly political in nature. This selective enforcement by YouTube and Facebook exposes their true intentions.

If YouTube wants to protect users from harm, why do they allow anyone to post medical, financial, or diet advice on their platform?

Why also does YouTube allow gambling and stock market trading advice on their platform without any vetting? Clearly this content is filled with bad advice that can cause harm to YouTube users, but no fact-checking or vetting is done for these items.

There are tens of thousands of videos that claim to teach viewers a fail-safe gambling method for casino games such a Roulette or Black Jack. Are these videos not misinformation? Why does YouTube choose not to police these as they are clearly misinformation that could cause a user to lose enormous amounts of money?

The point I’m making here is to show the hypocrisy of YouTube and it’s new fight against misinformation. They only want to focus on a small number of political issues so they can push a very specific Progressive narrative. The fact that the platform is filled with all kinds of misinformation, from get-rich-quick scammers selling money making programs to people giving financial advice with no credentials shows that YouTube could care less about protecting its users from false information.

The truth is, YouTube and Facebook simply want to control what you believe. This has always been the case, and their latest moves proves it beyond any doubt.