It’s less than two weeks and the new crop of Democratic “rockstar” congresswomen are already making fools of themselves.

It’s starting to look like Congressional freshman like Alexandria Ocasio-Cortez and Rashid Tlaib are not yet ready for prime-time. In the period of a week, both have made glaring gaffs and controversial statements that had they happened a few years ago, would probably be disqualifying. But with the current mainstream media protecting them, they are avoiding having to answer tough questions about their behavior.

But what is really important is that with the mainstream media anointing them as untouchable, the traditional democratic leaders will not be able to rein in their behavior without being attacked themselves.

The current leaders of the party, Chuck Schumer and Nancy Pelosi are clearly old and tired establishment politicians. If they try to rein in the behavior of these new young Democrats like Cortez or Tlaib, they will be labeled as old and out of touch. And Schumer, having lost the intersectional lottery will be attacked the most for being an old white male who is attacking these two women and denying them the right to speak their mind.

All this sets up a situation where you are going to see more and more gaffs from Cortez and more outrageous behavior from Tlaib.

Their fame has already gone to their heads and its only been a week. And now without anyone in the party with the ability to reel in their behavior, they will simply continue to act this way since it keeps them in the spotlight.

This is the problem the Democratic party has created for itself and now it’s starting to become obvious. They created an environment where they started to eat their own. We have seen it on the cultural stage as virtue-signaling progressives attack each other for not being “woke” enough. And now this same cannibalism has reached the political party itself.

Schumer and Pelosi did themselves no favors in this regard with their rebuttal to Trump’s Oval Office speech on the border wall. Pundits on both sides widely criticized the rebuttal as it made Pelosi and Schumer look old, tired, and out of touch.  So now with their image as being an old, white, elitist pair cemented in the minds of the public, they no longer can tell the younger “rockstar” Democrats how to behave without being accused of being old and god forbid, white.

There really is no telling where this will end up for Democratic party. They have a serious problem on their hands. One of their young stars has gone rogue and Schumer and Pelosi are left to look like the exasperated parents trying to rein in their rich teen-age daughter’s wild behavior. 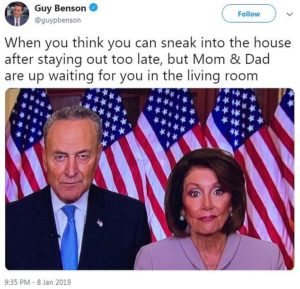 I guess the memes were more accurate than we thought.