Although it’s common knowledge that CNN has abandoned all journalistic and even ethical standards by this point, they continue to reach new lows.

Increasingly, CNN is using a title for an opinion piece as their main, bold print headline at the top of their news site and app. So their main headline is often not news at all, simply an opinion they disguise as news by adding the small tag “analysis” well below the actual headline, as if the two are not related in an obvious move to confuse readers. However, given the nature of CNN viewers, it’s probably not that hard to confuse them.

You can see a screenshot of their page below: 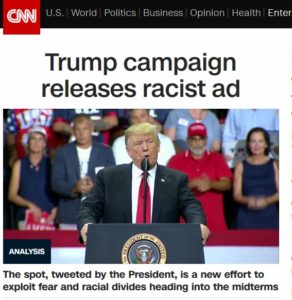 For starters, that headline would not pass any sort of journalistic standards for a news headline. The closest possible variation would have to read, “Trump campaign releases ad that some are calling racist”. As it stands, the headline is nothing more than an opinion, which is fine for someone to have, but not as CNN’s main headline.

What’s worse is they are doing this more and more often. Sadly, for research I have to visit CNN from time to time and recently they are keeping these opinion based headlines up for nearly a day or more. They will switch them out with others, but every main headline is simply the title to an opinion piece written by a CNN contributor and not actual news.

Finally, the hypocrisy by CNN for falsely calling out racism is almost too much to believe. This latest fake headline by CNN comes after CNN host Don Lemon claimed all white people are the biggest terror threat to America and then asked why there is no travel ban on white U.S. citizens. A statement that is not only overtly racist, it also makes no sense.

CNN has yet to comment on this overtly racist statement. Possibly one of the most racist things ever said by a news professional on TV.

So while this information may not be that shocking to regular observers of CNN who are aware of their bias,  it does show another low point in their never-ending race to the bottom.